Update: I completed the race! Skip to the end to see my results.

I’ll be at the starting line of the Chicago Marathon in less than a week. With so little time left, I am now reducing my mileage so my body will be fresh for the race.

Since I can’t do any more training to improve my fitness, the only thing left to do is think about my race strategy. This will be my first marathon, so it’s hard to know what to expect.

Fortunately, all the times from last year’s Chicago Marathon are available online. With a small amount of effort, I downloaded the data for all 26,000 people who ran the race.

While exploring how to run faster is fun, it isn’t my only goal. Honestly, I’m primarily focused on finishing the race without injuring myself.

Nevertheless, I was curious if I could learn anything to improve my chances of running a good race using data. So with that being said, let’s dive in.

Note: if you’d like to recreate or run this analysis with your own data, check out the code here: kmax12/marathon_analysis

In some sense, the race strategy is simple. To hit my goal of running sub-4 hours, I need an average pace of 9 minutes and 9 seconds per mile.

However, even though the Chicago Marathon course is relatively flat, I can see in the data it’s unlikely I’ll run each mile split at a perfectly even pace.

The published data contains the total elapsed time for each runner after every 5 kilometers and the half marathon distance. Using these times, I can calculate split paces for each runner at various points in the race.

I wanted to focus on casual runners like myself, so I filtered down to runners who finished the race with 8:40/mi - 9:20/mi splits and plotted their average pace per split. 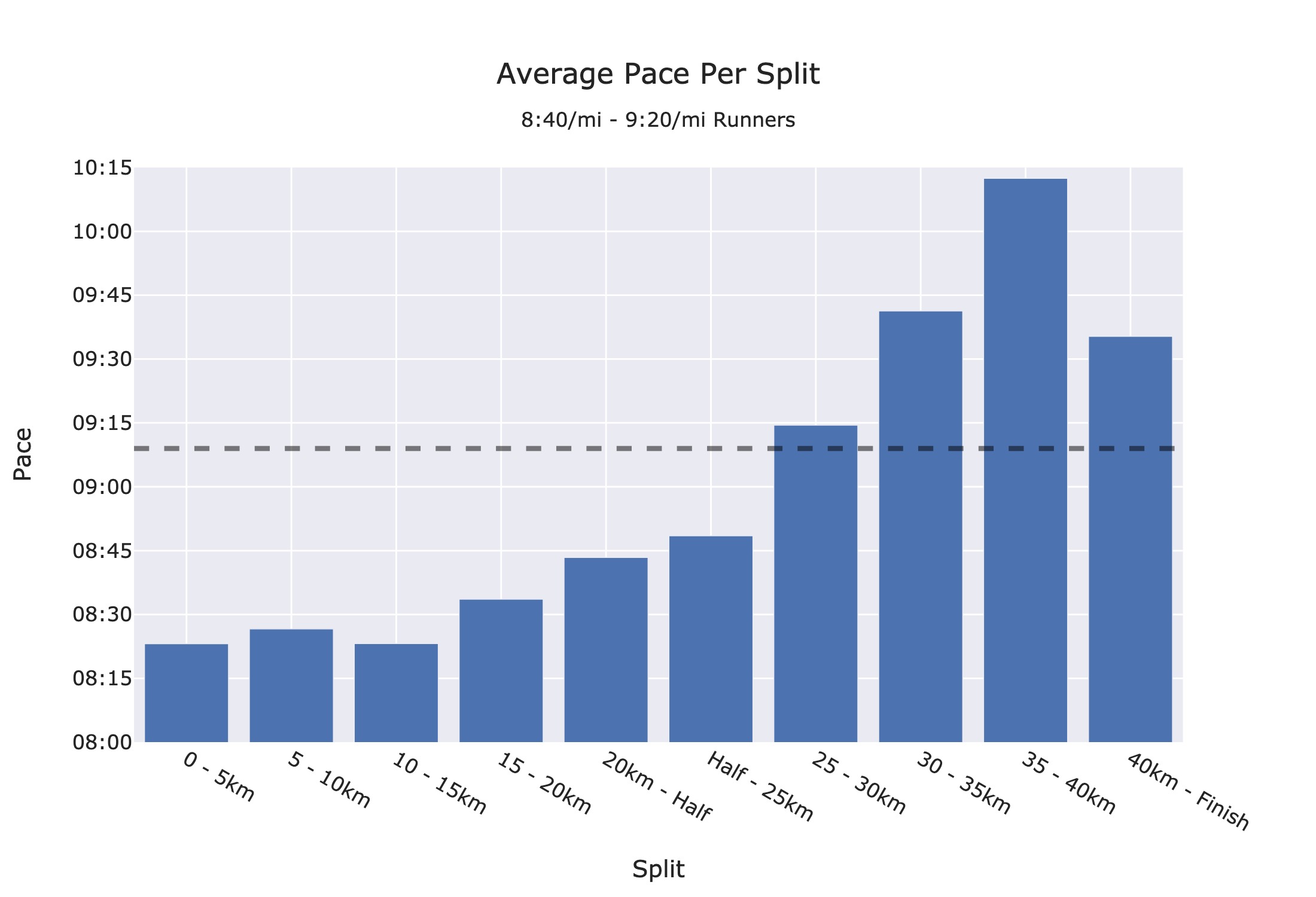 Psst..view on a desktop for interactive graphs!

This plot shows that, on average, the pace stays relatively flat (and below a 4-hour finishing pace) for the race’s first hal, but increases afterward. In particular, the rate at which runners slow down starts accelerating around 25km (approx. 15.5 mi).

While seeing this trend helps me understand what to expect, it doesn’t provide direct guidance on running a better race. Instead, we must look at what separates runners who ran “good” or “bad” races to develop actionable strategy ideas.

Who Ran a Good Race?

One challenge with analyzing this data is that it’s hard to know each individual runner’s goal.

Perhaps, if we get creative, we can devise a way to label some runners.

Let’s revisit the premise of this analysis: I am trying to break 4 hours. More generally, it’s safe to say that few people run a marathon intending to run slightly above a round number.

With that in mind, let’s look at the Finish Times Distribution with vertical lines at round finish times. 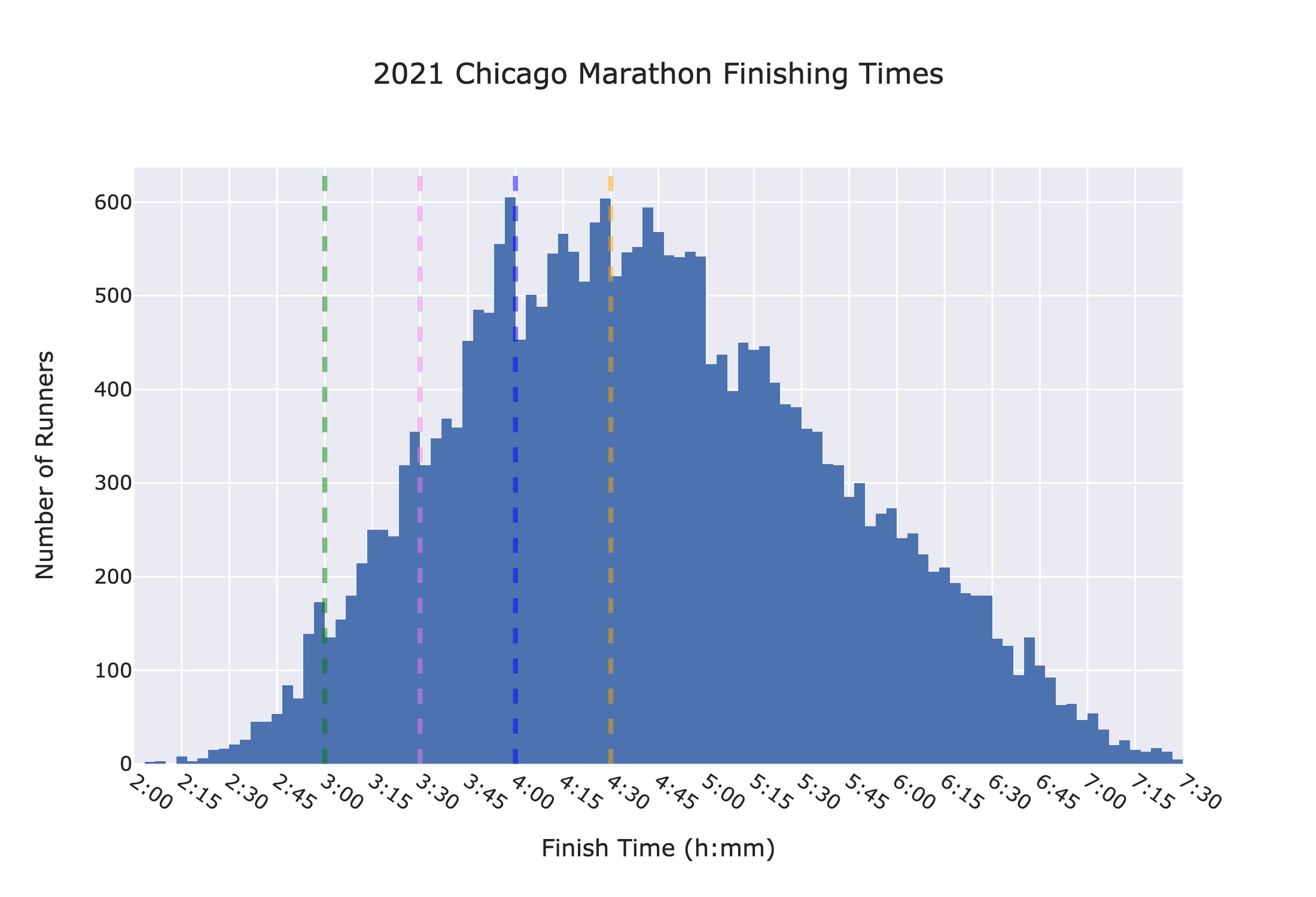 What clearly stands out is that more runners finish right before a round time relative to right after it. This substantiates the idea that people run the race with the explicit goal of beating a round time.

Based on this observation, I extracted 1576 runners who “closely missed” or “closely beat” a 4-hour finish time.

I now have a group of runners that all set out with the same goal as me - to run a sub-4-hour marathon - along with whether or not they accomplished that goal.

Focusing on the close-to-the-goal finishers makes sense because they are runners for whom slight changes to the strategy might be significant enough to make a difference.

How to be a Close Beat Runner?

Throughout my training, I did numerous half marathon runs. For each of those runs, I would reflect on how I felt at the end because I knew I’d eventually be running a second back-to-back in the process of completing the full marathon.

So, I first wanted to look at the distribution of half marathon times for each group. 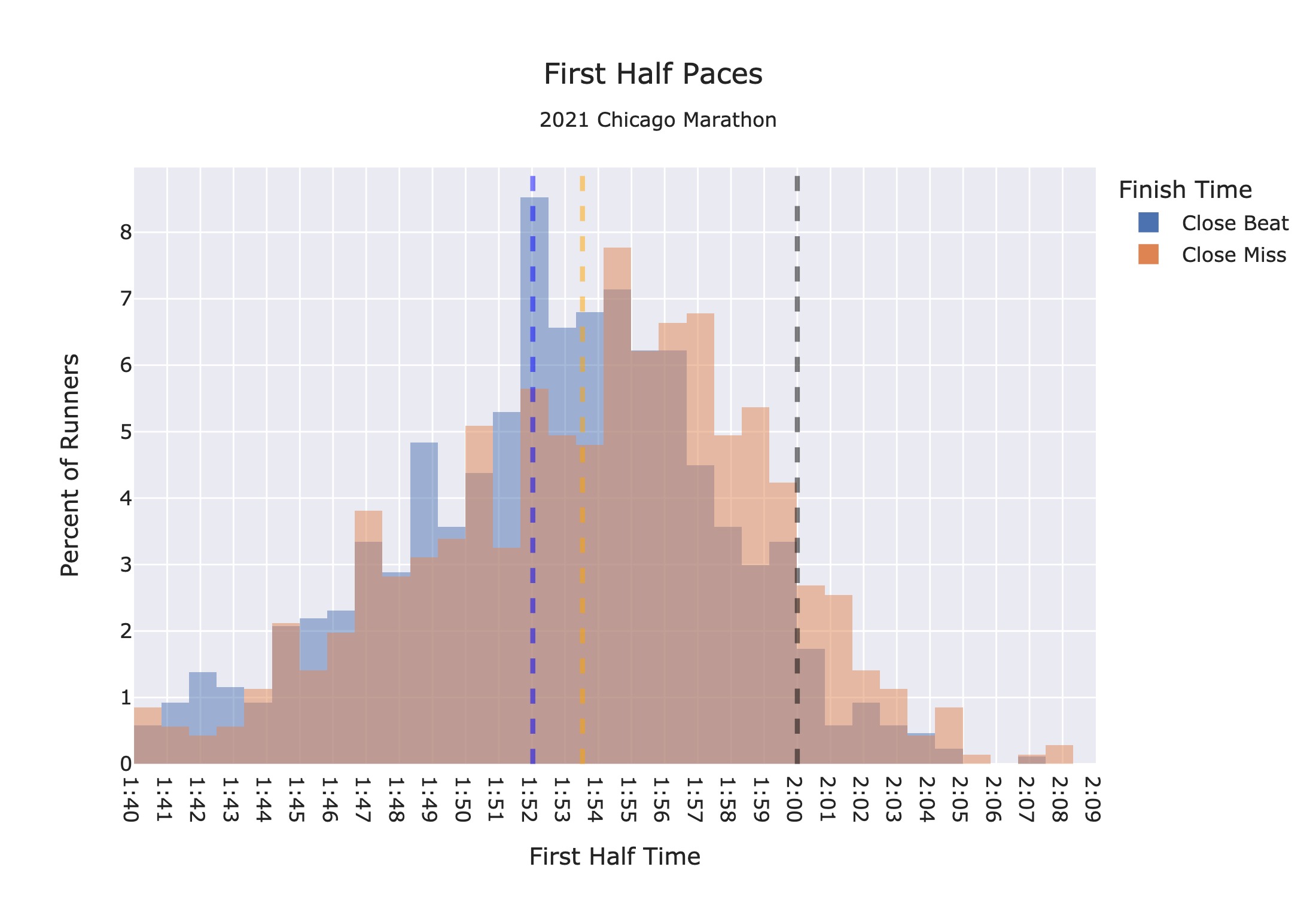 While the Close Beat group ran an average of 1 minute 30 seconds faster than the Close Miss group, the distributions look very similar.

Furthermore, the majority of both groups ran the first half in under 2 hours, meaning they were on pace to break 4 hours.

Here’s a way to see how similar the two groups are: if you picked a random Close Miss Runner, there is a 44% probability they ran the first half faster than a random Close Beat Runner.

Put another way, if you run the first half in slightly under 2 hours, it’s hard to predict if you will be a Close Beat or Close Miss runner.

My takeaway? The difference between these two groups is how they run the race’s second half.

What Happens in the Second Half?

Earlier, we looked at the average pace at each split. Now, let’s look at the difference in pace between Close Beat and Close Miss runners at each split. 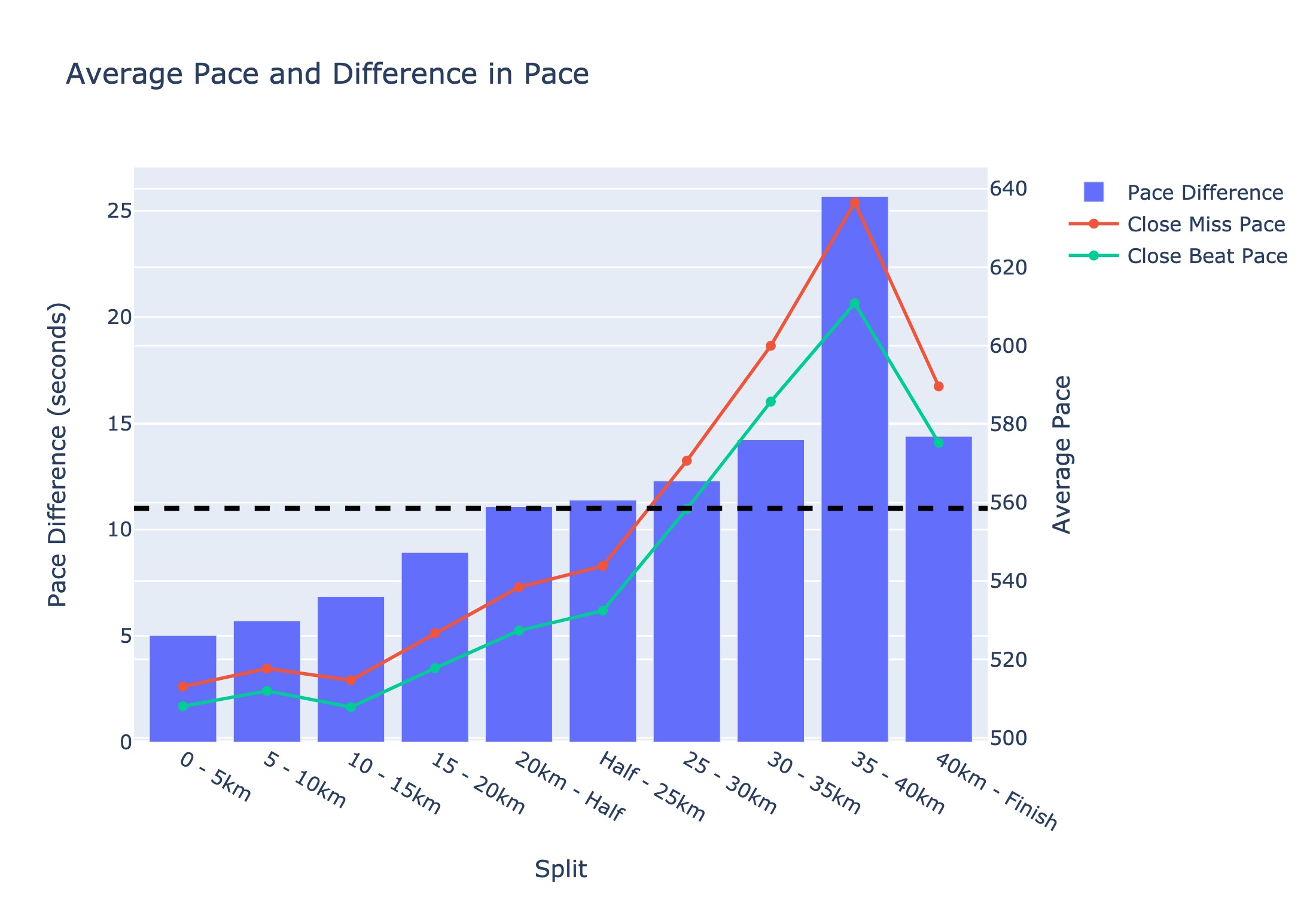 In the graph above, each bar represents the pace difference between Close Beat and Miss runners. Across the entire race, Close Miss runners have an average pace of 11 seconds slower than Close Beat runners (gray horizontal line). However, the individual splits tell a different story.

We know from earlier that most runners slow down significantly at the 35km mark (21.5mi). Still, the Close Miss group slows disproportionately compared to the Close Beat group because their difference in pace is greater than other splits.

This suggests to me that the Close Miss group ran too fast at the beginning of the race and potentially “hit the wall” before finishing.

Examining the Second Half Slow Down

Finally, let’s dig deeper into the correlation between the second-half slowdown and overall finish time by looking across all runners.

In the plot below, I graph the percentage slower each runner completes the second half vs. their overall finish time, along with the best fit trendline. 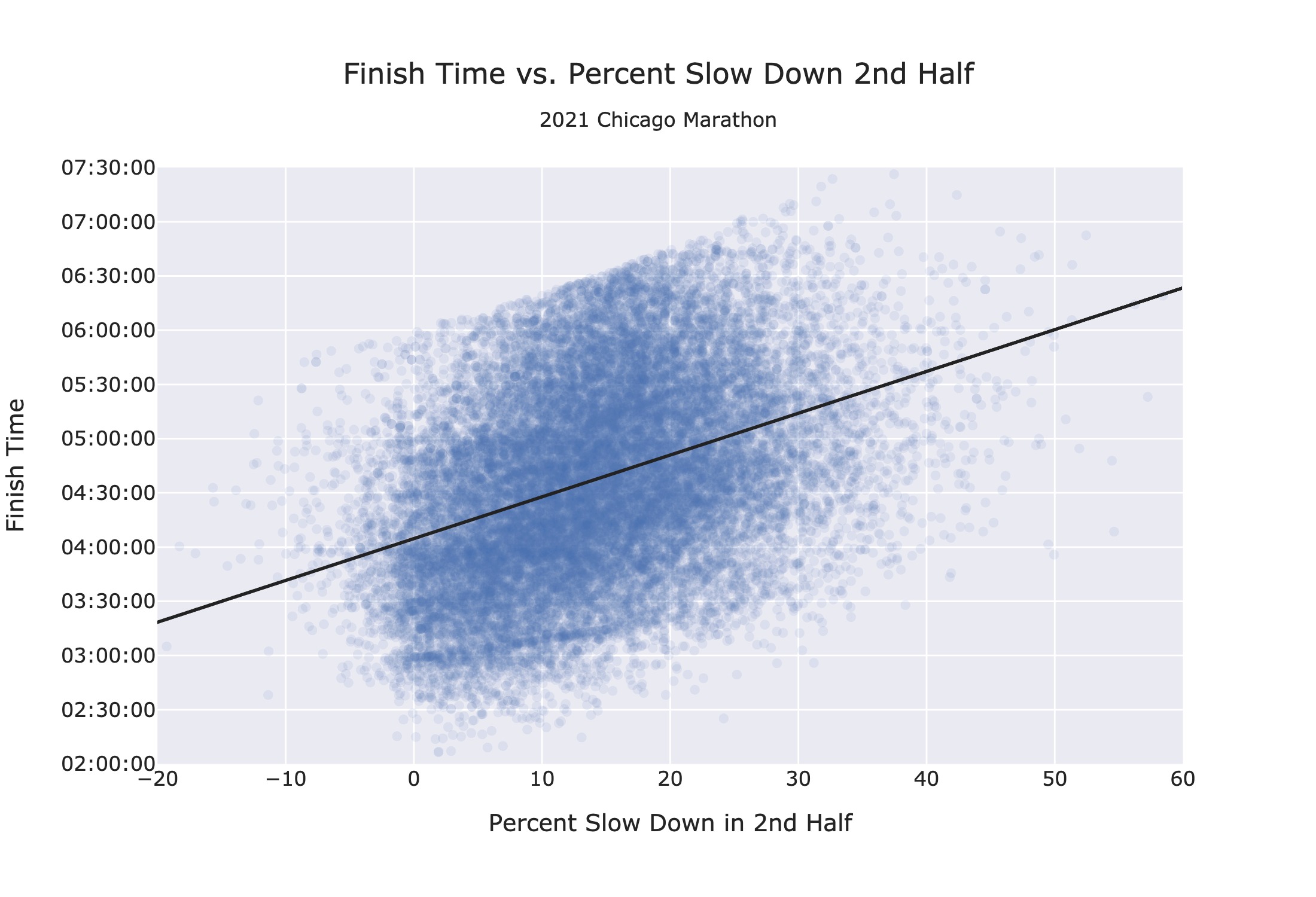 It’s hard to prove causation, but the correlation is clear. On average, the more you slow down in the race’s second half, the slower your finish time.

Overall, this analysis reaffirms that conventional wisdom is correct. The best pacing strategy is to avoid slowing down later in the race by not starting too fast.

Unfortunately, acting on this is tricky because setting an initial pace depends on my ultimate finishing time, and I’ve never run a marathon before.

However, if my goal is to break 4 hours, it translates into a simple strategy: run the first half a bit under 2 hours, and then slow down as little as possible

To help me achieve that, 3 ideas come to mind.

This analysis only looked at a subset of good/bad race times. There are definitely runners who had good races whose strategies I didn’t analyze. For example, the best strategy may be contained in runners who solidly beat 4 hrs rather than closely beat it. However, I couldn’t consider these people because I could not tell if someone between two round numbers had a good or bad race.

Additionally, my labeling of good and bad races may be noisy. For example, the people who only closely beat 4 hrs might not consider it a good race, and the people who closely missed 4 hours may have still beat their goal time.

Finally, I didn’t take into account the weather. The 2021 Chicago Marathon had warm and humid conditions that got worse later in the day. It would be interested to perform this analysis on different years or marathons, to see if it stays consistent.

To believe I can run a faster race by crunching numbers sitting at my computer is probably nothing more than wishful thinking. Regardless, it was enjoyable to explore this data, and I hope I presented some novel ways to analyze marathon race data.

I’ll close out with an animation I made to visualize the results. The Close Beat (Green) and Close Miss (Red) runners running around the course:

The first half came in at 01:56:43. Around 20 miles (~30km split below), I started to get cramps in both legs. At that point, I did the math of the pace I needed for the rest of the race to break 4 hours and adjusted to that. Here are my splits: 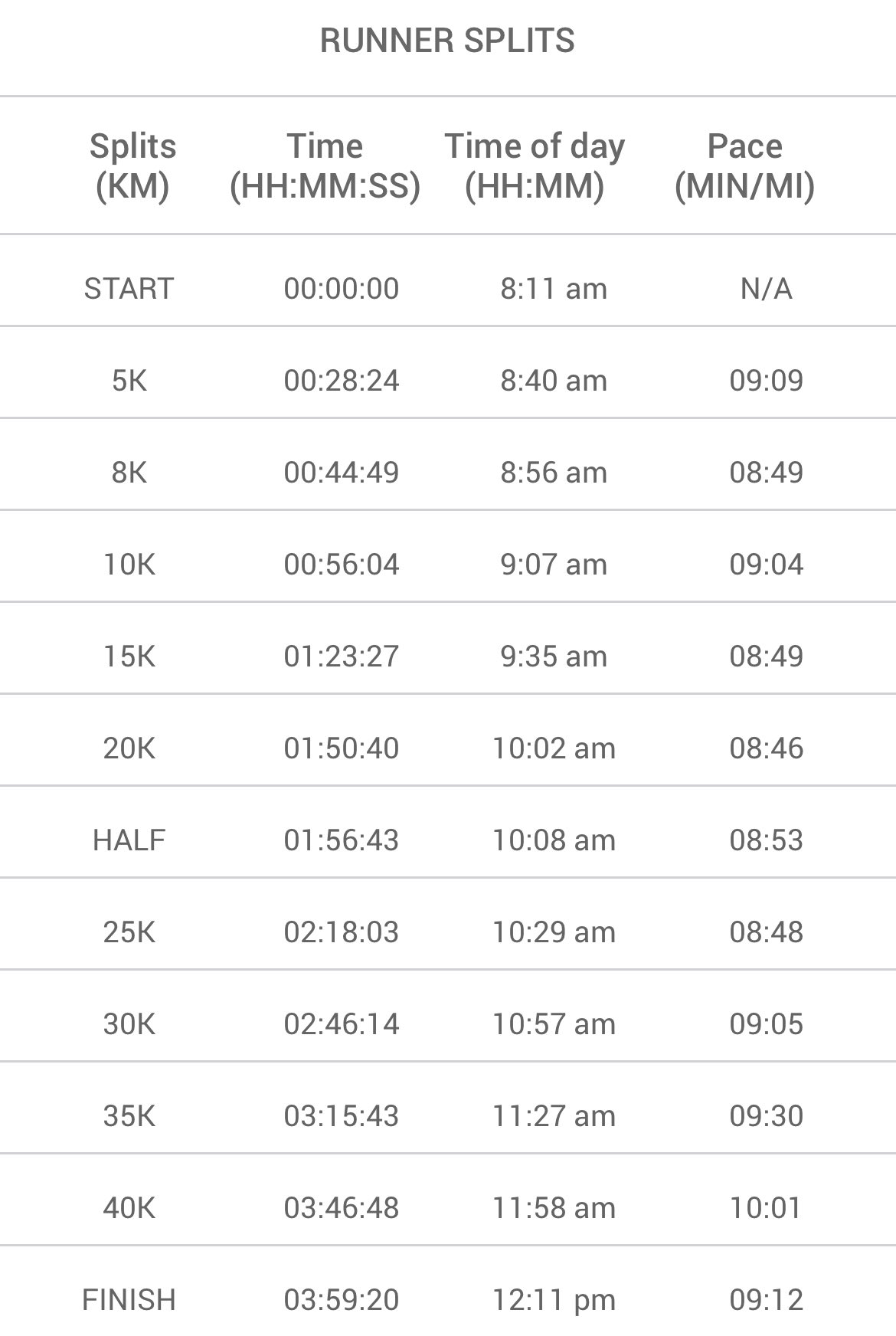 Overall, my times ended up being pretty close to my plan of running the first half slightly under 2 hours, and then focusing on slowing down as little as possible. I’m pretty happy with my pacing up until the cramping started. I think better hydration and fueling could have avoided that.

Nonetheless, it was an amazing time running around Chicago and I look forward to doing more races in the future!